People in South Philly love to shoot off fireworks. They seem to stock up in the summer, use them all summer, find a little extra in October, shoot those off, save a few for New Year's Eve, realize they had a few stashed away in February, etc. It's pretty annoying.
The other night, I was reading in the bedroom and RJ was on his computer in the office. I heard some fireworks and called out to him, "Happy 4th of July, RJ!" He said this great thing:
"They are 4th of Ju-liars!"

There's an elderly dude I see on the bus once or twice a week. I always tell him good morning. I'm not sure why. I just like him! I don't say good morning to anyone else except the driver. I might say hello to one or two ladies if they say hello to me, but they don't get a good morning.
I always wonder why he has to ride up to Center City. One time I "accidentally" saw a financial statement he was reading. He has quite the hefty retirement fund! haha

I love sunny Fall weekends. That is all.

I think I'm giving up on Facebook. I was never a big fan, but now I kind of hate it. I'd rather post various things here that only a few people read than keep up with 200+ people and the annoying babble some (most) of them post. I'm not going to delete the account, but I'm going to try to post here more.
Dear Livejournal,
You might be outdated and unfashionable, but so am I!

RJ and I had the brilliant idea to make double decker tacos for dinner. Can we pull it off? Will they be as wonderful as we hope??

After many years of watching MILLIONS of bad movies together, Mickie and I are finally bringing our reviews to the masses!

This was RJ's idea and he's our editor/producer. We plan to update every Thursday, and if we feel inspired maybe we'll review some old favorites in additional posts.

OK, you know I'm vegan. I hope you know I'm not a whiny vegan. I don't care what you do with your life, I don't expect every restaurant to have tons of vegan options, etc etc.
But! I just went to La Colombe for a coffee and asked for soy milk. They don't have it. It's not that they are out, they don't HAVE IT. I can't be the only person who has ever asked for soy milk (and a quick Google search shows other soy milk-denied comments). I think that when a certain number of customers ask for something you should probably stock it. This means that they don't stock it as a STATEMENT. As if having soy milk is too Starbucksy for them. Or soy milk ruins coffee. You can't sell me on that one. Vegans, vegetarians, lactose-intolerant folks, and fancy ladies lap up soy-based coffee drinks with joy!
Anyway, the dude told me I could have skim milk instead, just to be extra snotty.

For most of the week I thought LJ was finally blocked at work, but it turns out bad guys attacked it and I couldn't access the site. Whew!
I know LJ has been left behind by most of the world, but I still enjoy it. 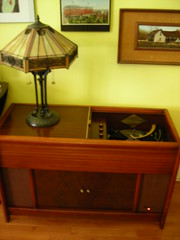 I need to write more "dear diary" livejournal posts, but until then, check out our new record player! Awesome ebay find! (Local seller so no shipping, and he cut the price way down for us.) It sounds great. True love! 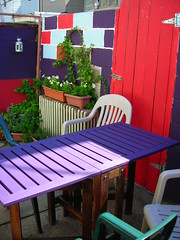 table and chairs in the "garden"
Originally uploaded by faeryhead

It's too warm to sit out here today, but hopefully this will be a goodtime place this summer!